Signs of the times?

These are the only signs of recognition we're aware of, around the country. 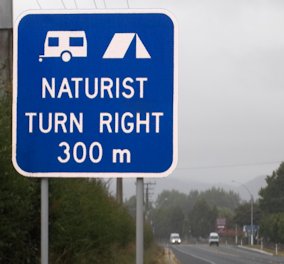 This is one of the few explicit road signs on a main highway to 'Katikati Naturist Park' in Wharawhara Road, just 3 km from Katikati on SH 2. (Note that there are a few 'standard AA' type signs near some local clubs, but they are quite often obscure references just to initials, or the names of the grounds which are not publicly recognised.) 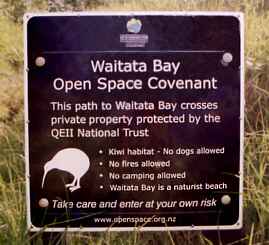 This is a rare result! It's due to having a Naturist-friendly developer, in this case. This notice is at the beginning of the track to 'Waitata Bay' which is just 2km from Russell, in the Bay of Islands. (The property owner insisted both on the notice and its wording, as a condition of putting the beach into the QEII National Trust. Note the last of the 4 'bullet points'.) 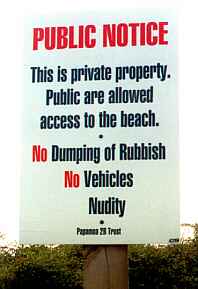 This is one of two notices facing the road at Papamoa Beach's 'nude zone'. (The notices refer to the dune area, not the beach; however someone has seen fit to minimise any confusion by removing the third "No" originally there.)
The notices are quite handy for effectively marking the area used on the beach behind them. 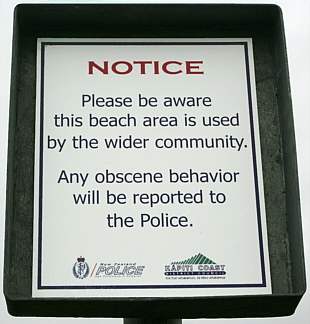 Most Naturists now go about 7 km (north, then west) to access the area from the end of Te Hapua Rd - off SH 1 (rather than from Peka Peka Rd; which is about 5km north of Waikanae).

However, following complaints from some local residents of inappropriate behaviour, the council erected this sign at the entrance to the beach track; a move applauded by Free Beaches NZ. 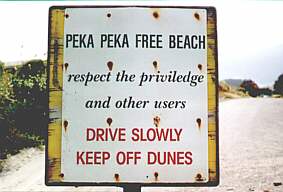 It's evident that this sign has been there for a while... What isn't clear though, is that most Naturists now go about 1 km north to access the area from Te Hapua Rd (off SH 1); rather than from Peka Peka Rd, where this sign is. It faces the beach, not the road. 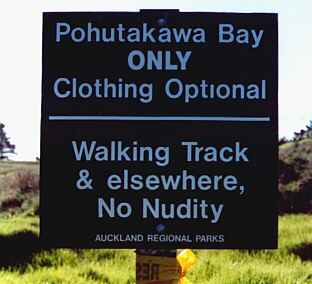 This sign, at: Pohutukawa Bay used to be at the northern end of 'Long Bay Reserve' - then under control of the Auckland Regional Council. A walking track runs about 1km along the cliff top, past this point.
However, after the North Shore City Council took back control in 2004, this sign was removed!