There are a number of spots around New Plymouth which enjoy clothes-optional status. This also applies to many of the beaches off SH 45 - the Surfing Highway; which lie around the perimeter of Mt Taranaki. (Though unfortunately, many of their names are hard to find.) 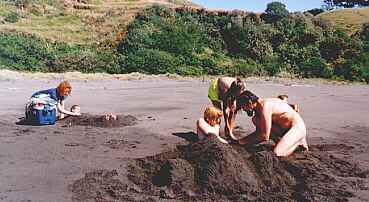 After Back Beach (below) Tapuae is probably closest to town - it's just 2km north of Oakura. Access is through a helpful farmer's track. Fortunately, things won't change, despite the 'lifestyle development' happening between the beach and the road there...

This is below Centennial Drive, just south of the iconic power station chimney. In the 70s this beach was all set to be the first 'free beach' designated by a council, but in 1981 the new Summary Offences Act made council designation of a 'free beach' redundant, so the proposal lapsed.

Back Beach on a dull day (area used is just past the large rock, below the tank)

About 20 km northwest of Wanganui, Ototoka is reached via a fenced, gravel track through a farmer's paddock. The nude area is a 3-400 m walk north west (though some prefer the southeast!) around the point visible from the car park exit point (at the top of the cliff).
South of Wanganui are several other possibilities for skinny-dipping, the first being South Beach, next to the airport.

The prevailing westerly makes the tall grass below the low cliff, a handy shelter

North of the Kapiti Coast

Just north of Waikanae is the popular Peka Peka Beach which has been in use for many years - though it is currently subject of a 'media beat-up'. After about 20km of stony and windswept foreshore, the next option going north is Waikuku Beach, the site of the first mass skinny-dip - of around 200 people (organised in 1968 by the Wellington Naturist Club).

Foxton has a stable car access to the beach, so you can drive onto the sand and go 10 km north from there to the middle of Himatangi Beach which also has stable access. On the way, you'll notice lots of driftwood, just inviting construction of a DIY shelter!

On these beaches there's an increasing amount of traffic, but plenty of driftwood